My Dad’s a Goldfish – Doing the mash up

I’d only turned my back for a minute to take something out of the fridge. By the time I crossed the kitchen floor it was to see the Goldfish, very carefully pouring his glass of orange juice over his meat and potatoes.

All the rules about what never say to someone with dementia went out the window. “What are you doing? Why did you do that? Your dinner is ruined.”

I always said we were very lucky the Goldfish never lost his appetite but we did go through some strange and often difficult phases at mealtimes. The swallowing problem I already wrote about in my last post. There was also the mashing phase.

The Goldfish liked to mash his potatoes into the gravy on his plate. Fine, I do, too, but for a time he mashed endlessly. He’d mash and mash. No amount of encouragement or persuasion would persuade him to stop. The food not only soon looked pretty unappetising, it was stone cold. It took me a time to understand he had forgotten what to do next, forgotten how to use cutlery – so he carried on mashing.

A good plate of Scottish mince and tatties – unmashed. Not going to show the horrible mashed up version.

He was not yet at the stage when he required (or would accept) spoon-feeding but he’d soon lose weight if I didn’t get him eating. Finger food worked. I gave him sandwiches, toast, cheese and biscuits – anything he could pick up and eat without having to use a fork or a spoon. The memory of how to use cutlery came back quite soon, thankfully, and the mashing stopped.

The false teeth popping in and out, was another phase we lived through for a while. He had a top set – the bottom teeth were his own – which he could somehow push with his tongue until they sort of hung out of over his bottom lip. Then, he’d do another manoeuvre which made the dentures pop back into his mouth again. It wasn’t pretty. Nor was his habit of removing the dentures when food got stuck under the plate and handing them to me to rinse under the tap. I’m a little bit squeamish about false teeth – dread the day I might need them – but, hey, I survived.

Sometimes, even without the mashing and the dancing dentures, mealtimes seemed to take forever. The purchase of a thermos plate helped. It had a compartment underneath which could be filled with hot water to keep the food warm whether we were going through the mashing stage or, most often, simply because the Goldfish ate very, very slowly. 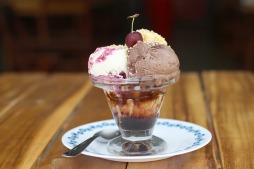 Put a dish of ice cream or bread and butter pudding (topped with cream), chocolate mousse, apple pie and custard and it vanished like lightning. Occasionally, I felt a bit guilty about the amount of puddings the Goldfish devoured. I have to admit, his diet was not always well balanced. His very lovely GP was reassuring, telling me that as the Goldfish was almost 90 and approaching the last stages of dementia he could eat whatever he wanted to eat.